skip to main | skip to sidebar

This is the wrap up to the Tapey DIY. 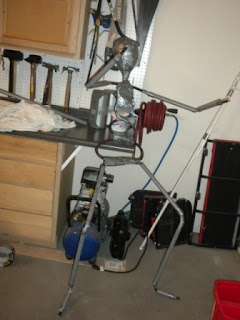 Here's the skeleton so far to Tapey. The dimensions end up being right around 5'10. with the same wingspan (36inches from mid chest to finger tips) and leg length (41 inches from hip to toe) as me. 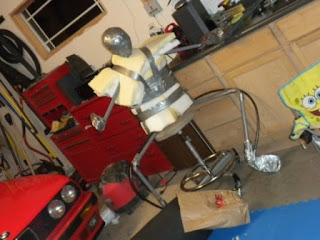 I had some extra cable when I cut down the arms. I used those to reinforce the legs. I positioned them to the outside of the PVC covered cable. This added a bit more structure to the legs. I figured that it would also help get dummy in positions like turtle and guard and mount. I started sectioning up the memory foam that I had and started with wrapping it around the torso of Tapey. 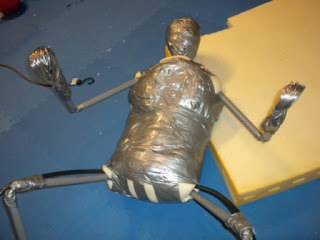 Here's Tapey with with more tape around the bottom of the trunk and with hands being formed. Remember the wire that was wrapped around the cable (mentioned in Part 1)? I used that to form hand shapes and foot shapes. I'll start to wrap these good with tape. 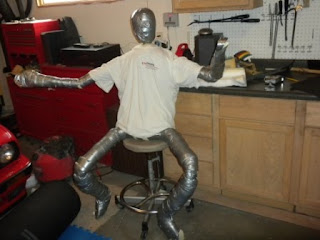 Here he is almost totally done. I'll post final pictures when I take them. I used foam around the legs and arms. And lots of tape! I had to pick up some additional foam to add to the arms and thighs. I picked that up from a Walmart in their sewing section - you can get it at most fabric stores.
One other touch - I used bungee cord to add some tension to the arms and thighs and legs of the dummy. That will take a picture or two to describe. But I'll try to do it without.
I used short pieces of bungee taped to the insides of the dummy's arms and thighs. So picture this - a piece of cord taped to the inner bicep, attached to the upper chest of the dummy and taped to the other arm in an identical spot on the opposite inner bicep. I purposefully cut the bungee cord shorter than the span of the arms. So while bicep to bicep stretched out may be 32 inches, I attached those two points with cord that was 26 inches. This gave the arms some spring and tension. I did the same to the legs - cord attached thigh to thigh. I finally did the same with each leg - calf to hamstring. That gives the legs spring and tension and moves the appendages all back to a good working position.
So, do I use the dummy? Yup about twice a week. Recently I was repping the different versions of the Elbow Escape as instructed by Gracie Unversity. It helps a ton to get some muscle memory.
My kids love the dummy - they are the ones who named it Tapey. The foam and tape have given it a very punchable, kickable and bounceable body. Fun, Fun for a couple kids.
I keep it in my workout room. Tapey wears an old gi and just sits there in either turtle position or sitting up. It always freaks me a bit because it does look so real.
Final pictures to come.
Posted by Mike V at 6:57 PM

Mike V
Attention Deficit Dad with as many interests as days in the year. You can't hold me back and you can only hope to contain me!