skip to main | skip to sidebar

continuing my DIY on making a homemade grappling dummy. 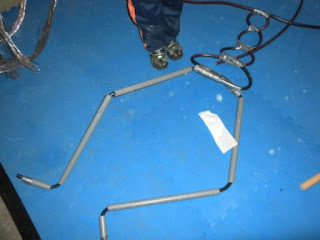 While I used a similar supply list that the other dummy makers used, I created the skeleton a bit differently. I cut the cable in half and used one half to form the feet legs, one half of the spine and the opposite shoulder, arm and hand. And then did the same with the otherside of the body. I intertwined the cables at the spine/back location to add some rigidity, and normal flex to the dummy. I wanted to create a hip/torso area that would mimic the human body a bit - A place to really place plan legs onto when doing reps.
As you can see, I used the PVC to really define the feet, lower legs and femur. 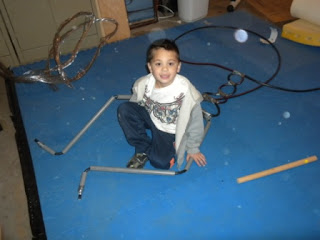 Here's my little guy. He helped a ton and gets a kick out of rolling with Tapey right now. In the upper left had of the picture is a bundle of wire that was wrapped around the cable that I used to form the body of the dummy. I will use that later. 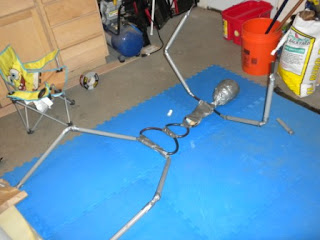 I continued on to form the shoulders, upper arm and lower arm area. I used the dowel from the previous picture and the replacement mope head from the previous post to create the head of the dummy. I started really using the duct tape now. Securing the hips, spine, the head and neck and shaping the head. 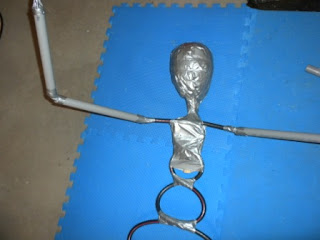 Another shot of Tapey's head, neck, spine, shoulder area. So far, so good. He's almost ready to roll with!
Posted by Mike V at 3:21 PM

Mike V
Attention Deficit Dad with as many interests as days in the year. You can't hold me back and you can only hope to contain me!